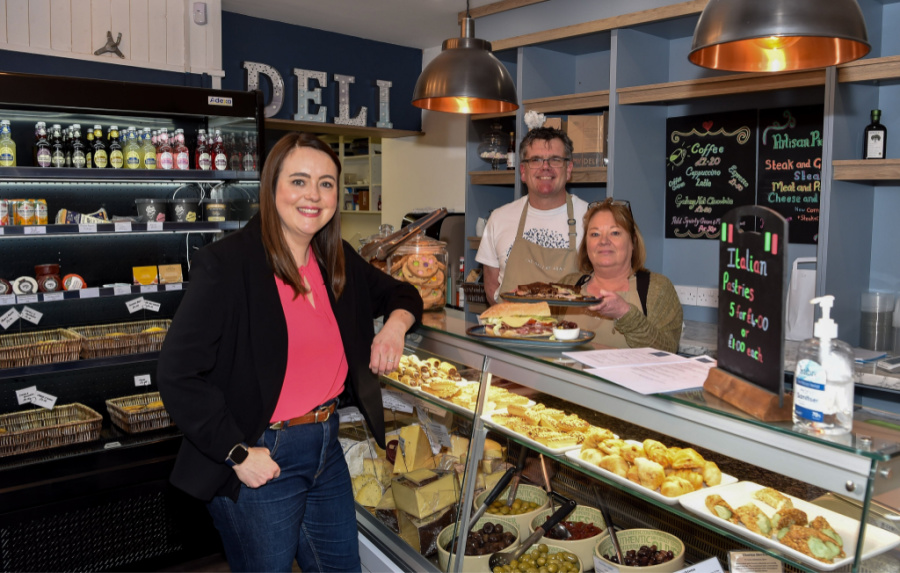 Cllr Kate Groucutt visits the Deli at 40a in Earlestown, run by Lynette and Paul Crean.

A small independent delicatessen in Earlestown has been supported to grow after securing grant funding from St Helens Council.

The Deli at 40a – one of our Featured Businesses – is a family business based on Bridge Street, run by husband and wife team Lynette and Paul Crean.

With a mouth-watering selection of artisan cheeses, bread and homemade pies, The Deli is popular with locals and has a growing reputation. But like all businesses, the impact of COVID made the future more uncertain.

But now, supported by a £5,000 grant from St Helens Borough Council as part of the Metro Mayor’s Town Centre Fund, Lynette and Paul have invested in the business, renovating their kitchen area to allow them to offer hot speciality sandwiches in addition to their usual produce.

The Deli at 40a is one of 20 businesses in Earlestown and St Helens town centres to benefit from a pot of £500,000 in Town Centre Funding.

Launched in July 2021, the grant scheme aimed to develop investment and growth in town centres, enabling businesses to carry out extensive improvement works as part of their recovery from the coronavirus pandemic.

Located to the back of the building, The Deli at 40A’s kitchen area has been updated with new shelving, while the old Artex walls have been replaced with new plastering and a lick of fresh paint.

The funding has also allowed Lynette and Paul to purchase new appliances, such as a bigger sink as well as an oven to sell hot goods such as pies, which are made at home by Paul.

Lynette,  who opened the deli in 2019 after a career in public health, said: “The support we have received from the council during the application process has been brilliant and we’re grateful for this funding opportunity which has enabled us to broaden our horizons and offer more things.

“With covid and everything going up in prices, it’s been a struggle to keep going so all the little top-up grants from the council have allowed us to expand and grow a bit more and sustain us. If it wasn’t for grants like this, we wouldn’t be in the position we’re in.”

Looking to the future, and the planned regernation of Earlestown Town Centre, Lynette said: “I’ve lived here all my life and it used to be a bustling town, especially Fridays on market day and hopefully that will come back.  Newton High Street is booming now but hopefully we (Earlestown) can be the shopping district for the whole of Newton-le-Willows.

“Since the Earlestown masterplan was announced you can see bits and bobs happening already – like people looking after their shops more or they’ve had them done up – so the town looks better, and hopefully other independent businesses will follow.”

Cllr Kate Groucutt, St Helens Borough Council’s Cabinet Member for Education, Skills and Business (pictured above with Lynette and Paul) said: “Since starting up in Earlestown three years ago, The Deli at 40A has established itself as a firm favourite with residents, and that’s down to the passion of Lynette and Paul who love what they do which clearly shows in the quality of their products.”

“Our town centres have had it tough for a number of years, which certainly hasn’t been helped by the pandemic, but as a council we are taking back control to deliver ambitious regeneration plans for St Helens and Earlestown to make the changes residents want to see.

“Having business ambassadors like Lynette and Paul who have felt the challenges over the past few years but come out stronger, is a success story worth celebrating. They can show existing and prospective businesses owners that St Helens Borough really is a great place to live, work, visit and invest.”

Steve Rotheram, Mayor of the Liverpool City Region, said:  “Getting town centres and high streets in all parts of our region back on the up has been a priority for me since I was first elected. During my first term, I launched a £6m Mayoral Town Centre Fund, which is benefitting communities like St Helens through projects like these.

I know that town centres across the country are facing an existential crisis and the pandemic has only made that worse. But I’m committed to helping reimagine and regenerate these spaces and put them back at the heart of our community. Everyone should have a vibrant local high street that is a hub for people to meet, eat, shop and socialise.”

The Deli at 40A is open Wednesday to Saturday, 9am-5pm.  Find out more about what they offer.

Earlestown gets ‘Welcome Back’ makeover