It was a glorious weekend for Newton-le-Willows gymnastic club Hope Acro at the British NDP Championships in Stoke-on-Trent.

Three trios, who qualified to represent the north-west after becoming regional champions in October, travelled to Stoke-on-Trent to compete against the nation’s best for the British titles. There was tentative hope for a medal or two but by the end of the weekend the gymnasts had performed beyond anyone’s wildest expectations.

In the Grade 2 Women’s Group category, rising stars Eva Barron, Eva Booth and Daisy Kay produced another outstanding display to score a phenomenal 27.430. It seemed an unbeatable score until their rivals representing The North took to the floor and performed another stunning routine. There were tense moments before the judges’ score was announced, which turned to joy as Barron, Booth and Kay realised they has edged out their closest opponents by only 0.04 to become Hope Acro’s first British champions in the club’s first year.

The elation carried through to the Grade 3 Women’s Group category as Isobel Stirrup, Lola Sitko and Ellie Rose Fenney were first on the floor. The trio knew they had to post a big score to put pressure on their rivals and they did not disappoint. A thrilling routine saw them awarded a score of 26.130 which brought with it high hopes of holding on for a medal position. It was a nailbiting session, as one by one their competitors fell just short and by the final reckoning, Stirrup, Sitko and Fenney were Hope’s second British champions in the space of a couple of hours. The Hope contingent in the packed arena and the Hope Acro family watching the action unfold at home on the live stream at home were overjoyed at their very own ‘Super Sunday’.

The medal magic had begun a day earlier in Saturday’s competition as Charlotte Kerboas, Hannah Guerin and Emma Green faced formidable opposition in the highly competitive IDP Women’s Group category. After their stunning Balance routine achieved an outstanding 25.230, the trio held the lead, after once again outscoring a couple of rivals from their recent victory in Sunderland at the South Tyneside International Acro Cup. Sadly, they couldn’t quite hold on, as they saw their score surpassed at the death by an extraordinary performance by the eventual winners from Deerness Gymnastic Club in Durham, representing The North, to push them into the silver medal position. The disappointment was short-lived, as Kerboas, Guerin and Green celebrated winning their first British Championship medal.

Coach Alison Ellison was delighted with her charges, “A remarkable achievement for our first British finals and to say we are proud is an understatement. And we couldn’t have done it without our dedicated coaching team and wonderfully supportive parents and families.”

Amidst the exhilaration of the medal rush, there was added excitement as the gymnasts met the stars of BBC show ‘Gym Stars’, who were at the competition representing King Edmund’s Gymnastic Club in Bristol.

Due to unprecedented demand, Hope Acro have added extra classes for Beginners, and have a limited number of squad places. Interested parties can email hopeacro@gmail.com for information on starting your child’s gymnastic journey with Hope. 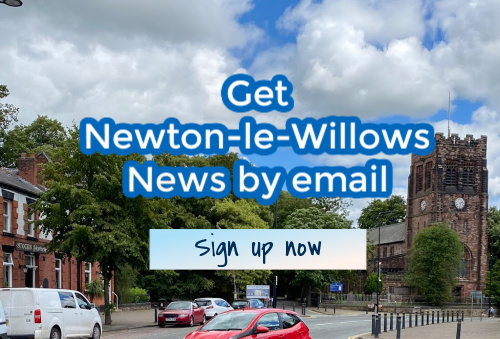 Stay in the know about what’s happening in Newton-le-Willows. Our weekly email bulletin will bring you news, events and local business information each and every Wednesday. Sign up now. If you are looking for a local business, organisation or service, make sure you check out our Local Directory for Newton-le-Willows.

Don’t forget, if you want to be added to the directory, it’s free. Find out how to be listed.

Newton firm helps get new HGV drivers on the road

The Newton-le-Willows road closures you need to know about

Stop for a chat at Happy to Talk Bench