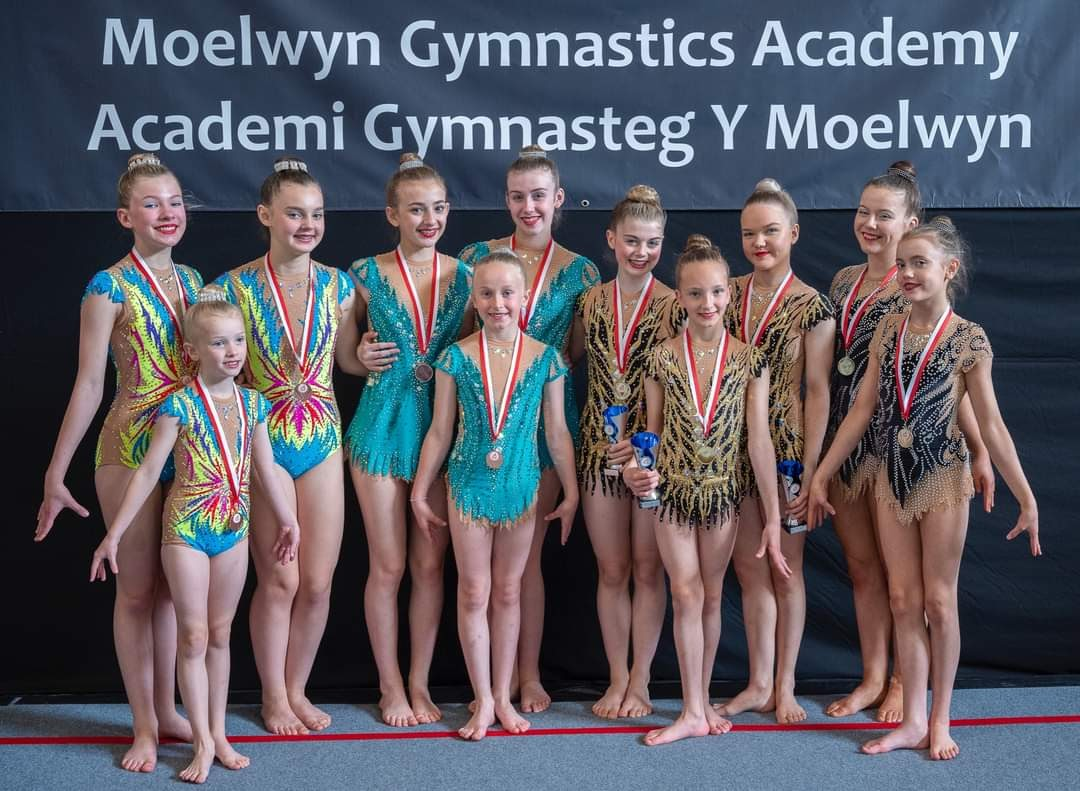 Newton-le-Willows’ Hope Acro travelled to the beautiful Welsh mining village of Blaenau Ffestiniog this month to take part in the Moelwyn International Acro Cup. There was added excitement as fierce competition was provided by a team from the Akrobatika Kool club in Estonia. In the shadow of Mount Snowdon, Hope produced some towering performances to collect a host of medals.

In the FIG 11-16 Women’s Group Category Holly Williams, Darcey Cassidy and Emma Green produced a solid Balance routine in the first round, but found themselves with a mountain to climb as the judge’s scores placed them 0.4 points behind the leaders from Birkenhead. In the second round, the new trio performed their Dynamic routine for the first time in competition. A dazzling display saw them claw back the deficit to take gold. They were later delighted to learn that they had claimed the award for highest FIG score across the weekend.

In the same category, Hannah Guerin, Betty Prescott and Rosie Kay pushed their clubmates all the way with two stylish routines and were rewarded with a well-earned bronze. It was a closely fought battle with the three medallists separated only by 0.275 in the final reckoning.

A third Hope trio was due to compete alongside the medallists, but an injury to Madi Corless in the days leading up to the competition meant that Mia Ellison and Ava Earley had to hastily adapt and revise their routine to take their place in the 11-16 Women’s Pair instead. It was Earley’s return to action after her own serious injury but the pair’s determination to overcome their setbacks saw them take gold with a sparkling performance.

Yet more success came Hope’s way as Isobel Stirrup and Lois Preston exhibited class and poise to claim victory in the Grade 4 Women’s Pair Final from 2nd place in the first round. Alice Pownall, Hattie Lloyd and Daisy Denmade dominated the Grade 2 Women’s Group from start to finish to top the podium for a second successive competition.

Libby Williams and Isla Cook, competing as a base for the first time after transitioning from a top, were magnificent as they took silver in the Grade 3 Women’s Pair final of an always competitive category.

The tireless Libby Williams took to the floor in the Youth Women’s Group with Jessica Lancaster and Alysha Ward. A sensational routine in the first round saw them top the standings, but they were edged out in a hotly contested final to win a hard-fought bronze. Their bronze medal performance was matched by Annabelle White, Daisy Kay and Amelia Harper whose beautiful exhibition of skill saw them miss out on gold by only 0.1

It was another successful weekend for Hope, with every partnership medalling and this month sees a landmark as the club celebrate their first birthday since their formation last summer.

Your gardening guide for August

‘Levelling Up’ hope for Earlestown

Sun shines as crowds enjoy the return of Newton Town...

Young people invited to sign up for Environment Days