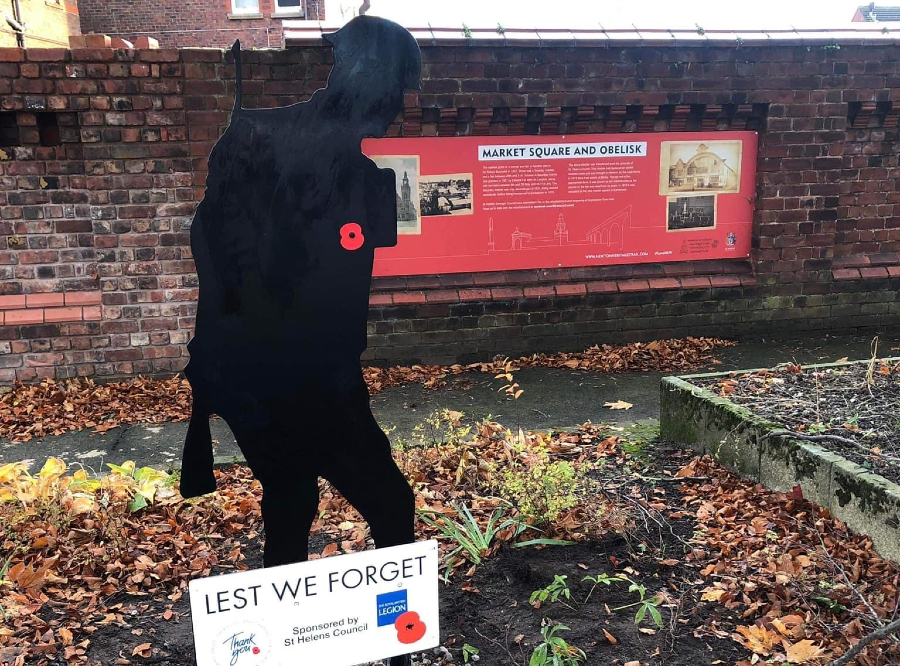 Newton's Sillhouette Soldiers have been restored.

The three ‘silhouette soldiers’ who’ve been standing guard around Newton-le-Willows and Earlestown since 2018 have been repaired and restored ahead of this year’s Remembrance Day commemorations.

The three soldiers, who represent those who never came home from conflict, were installed in 2018 after St Helens Council purchased them from the Royal British Legion. The soldiers are one-off pieces, and were located at Earlestown Town Hall, Newton Station, and Newton Cemetery.

Unfortunately, over the past four years, each of the silhouette solders has been damaged or vandalised – so this year, ahead of Armistice Day, local councillor Sev Gomez-Aspron issued a plea for the artworks to be restored.

That’s when Marcus Allanson from Profix – a St Helens based metal fabrications, laser and welding specialist – stepped in.

He carefully removed and restored each of the soldiers, carefully replacing them all in their original locations ahead of the 2021 Remembrance events.

Cllr Gomez-Apsron said: “The silhouette soldiers represent those who never came home from war, walking back to their houses from train stations on their journey home.

“In time for Remembrance day, after a call for help, local legend Marcus Allanson from Profix has kindly taken the vandalised and broken silhouettes out, replaced all three of them, and reinstalled them in their original locations.

“They’ve been re-made and toughened up. And a new poppy attached.

“It’s an unbelievably kind act, in a tough time, when businesses need all the help they can get.

“So thank you to Marcus and Profix for allowing us to continue to remember those who paid the ultimate price.”

Parkside development gets go-ahead from Government