The boys' quick thinking and bravery saved the life of their young friend.

August 19, 2021
A group of teenage boys from Newton-le-Willows who helped to save the life of a friend have received awards from North West Ambulance Service and St Helens Borough Council for their heroic actions.

In April this year, Connor McManus, 14, Harley Molyneux, 13, Bradley Poyser, 12, and Cori-Lee McCarthy, 13, were out on their BMXs over a local landmark known as the Mucky Mountains when Cori-Lee came off this bike, suffering a serious injury.

Trying to laugh off the injury at first, Cori-Lee looked down to see he was bleeding heavily, resulting in his friends immediately calling 999, with the call handler advising the group to download the What3Words app to get a precise location of the emergency.

Cori-Lee was airlifted to Alder Hey Children’s Hospital where he spent three days – but was told he would have faced life-threating injuries if it hadn’t had been for his friends’ quick-thinking.

Also, a cheque for £200 is going to the North West Air Ambulance charity after a local crowdfunding appeal. 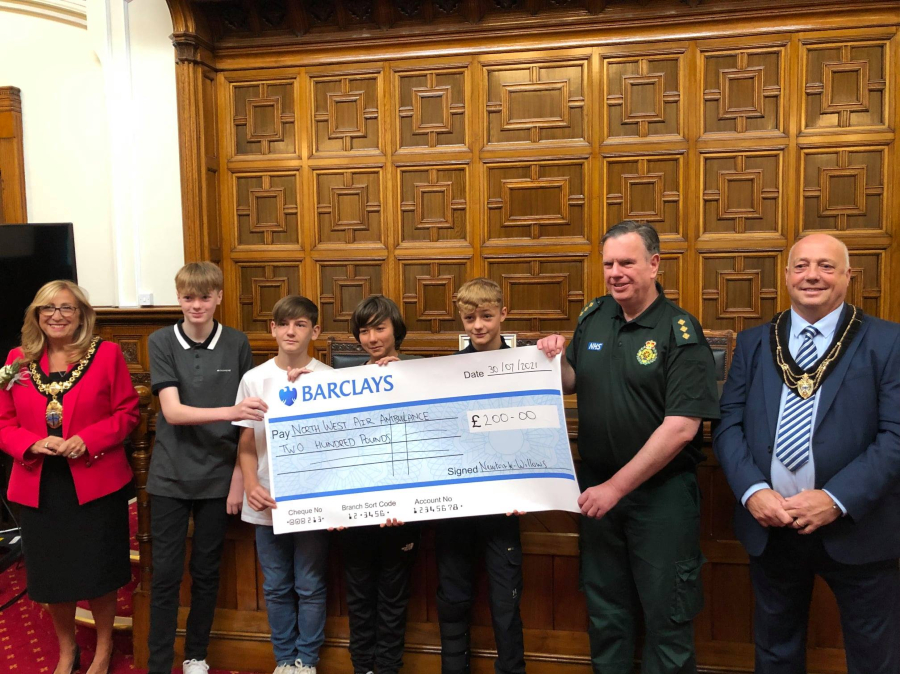 Speaking at a presentation ceremony in St Helens Town Hall on Friday, 30 July, fittingly on Friendship Day, Councillor Gomez-Aspron MBE, said:  “After hearing about what happened, I wanted to ensure the boys were recognised for their outstanding clear mindedness and quick thinking. The response from the public to congratulate them was huge, and to be able to present £200 back to the air ambulance charity was fantastic.

“Having grown up in Newton-le-Willows and played in the same place as the accident happened when we were kids, I can’t imagine how daunting the situation was.

“I hope the rest of the school holidays for the lads is a little bit quieter.”

After presenting the group with their Good Citizen certificate, Councillor Sue Murphy, Mayor of St Helens Borough, said: “When I was told what happened, I thought we had to do something, so It was an honour to present these awards to a group of young men who have done an absolutely outstanding job in helping to save their friend’s life. Their families must be so proud.”

He said: “It’s great to hear a story like this, and only right that we commend their actions. Bradley, Harley and Conner were incredibly brave and acted with calmness and maturity. It would have been easy for them to panic with the accident happening so far from help.

“Not only were they able to call for assistance, but they help stem the bleeding on Cori-Lee’s injury, and then went to meet ambulance crews and aided them in bring medical equipment to their friend.

“I know their families are incredibly proud, and I’m sure the wider community will be too.